So, I’m waaay late in reporting on this one, but a few of the Columbia, SC LUG guys and I spent at the first annual Southeast Linux Fest this year, and it was packed with so much perfect frosted dorkery, I came home all, “OHAI <husband>, if time == now then feedKendra(lasagna, salad) or die”.

Kyle nursed me back to English-speaking, pop-culture health with a steady diet of tabloid articles about Kirsty Alley’s weight gain and the horrific blog posts about Duke leaving Freezepop.

This update is made possible with (and only with) the unwitting aid of Charleston Linux User Group member Eugene, whose digital camera contains the world’s only actual proof that I exist.  Proof which I gleeflully filched from his website and edited.

The ne’erdowells. Neer-do-wells. Neverdo’wells. Okay, until I can punctuate that, I’m forced to admit that we were actually pretty tame. But Shay did end up enjoying quite a few metrosexual daiquiris, and Louis hid out behind the gym (read: bathroom) smoking stogies (read: texting on his PDA) and Derek slept in his car. 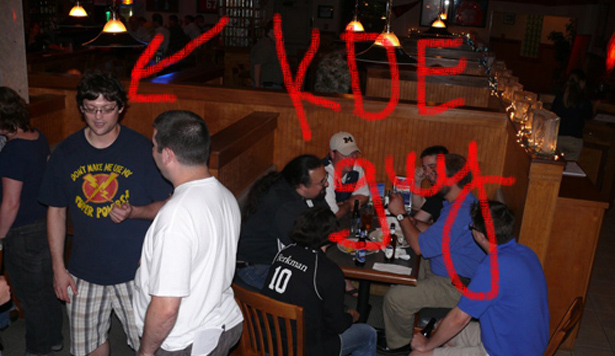 This is KDE guy, a mere 10 hours away from our uber-awkward conversation. I was walking by his booth the next morning, and he was all “*mumble mumble* question?”, and I thought he said, “Can I ask you a question?” so I said “Sure,” and stared at him, and he stares at me, and then he’s all, “What?” and I’m all, “Wait, what did you say?” and he’s like, “I SAID, can I answer any of your questions?”.

And it somehow devolved into me asking him what KDE was, even though I already knew, just to smooth things over, but I hadn’t had any coffee, and I could barely hear him, but I didn’t want to take the long route to making it worse by bleating “what?” over and over, so instead I took the direct route to making it worse by saying something like, “Oh, um, so, it’s a desktop environment?” And then I ran off somewhere and banged my head into a wall. And he’s pretty cute, which made the whole thing extra sucky. 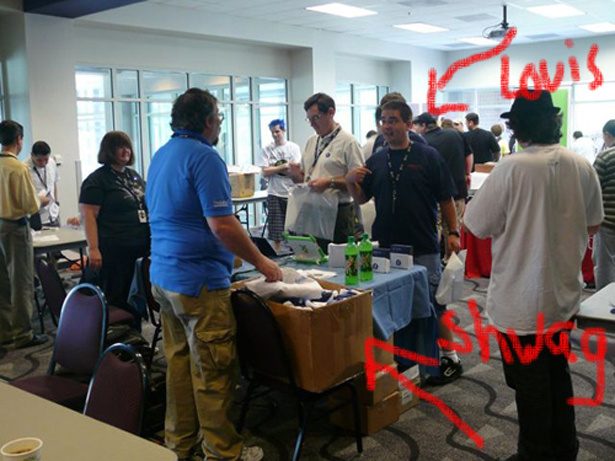 Louis is not only cool, he is also a total shwag whore. How much of a shwag whore, you ask? During the second trip back to the car to “drop his stuff off”, Louis was all, “What? It’s not like I go shopping ever.” 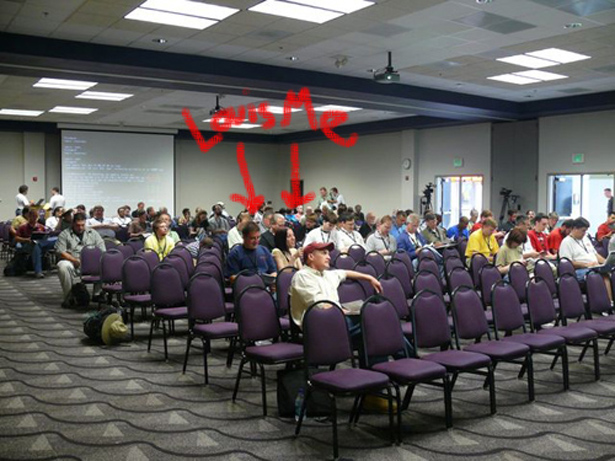 I’m  pretty sure this is during the morning keynote speech. I can tell because that’s my “Oh dear God I still haven’t had any coffee” face. I felt really horrible stealing the last of the coffee from the VIP speaker’s lounge, before I really realized it was “not for everyone” coffee. But then I had some. And I didn’t feel bad anymore. 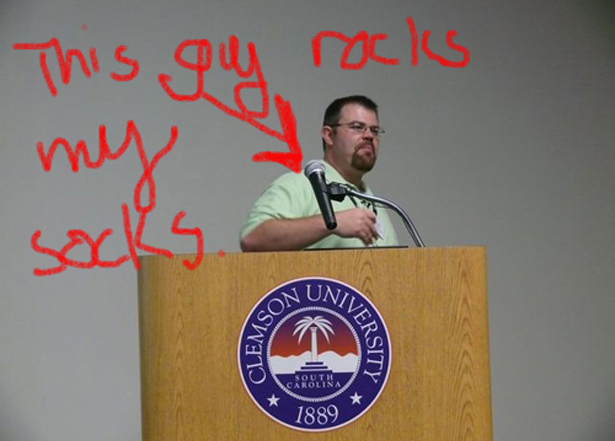 This is Joe “Zonker” Brockmeier, the morning keynote speaker, and it’s a blessing from the gods – and the SELF organizers – that he was the first one we heard in the morning. Awesome, awesome speech. Though I do wish he’d warned us about the pelting-us-with-cool-stuff before he threw something at me, because I ducked, and in doing so I think I missed my chance at a penguin plushie. Yeah, those would be my highschool reflexes, thankyouverymuch. 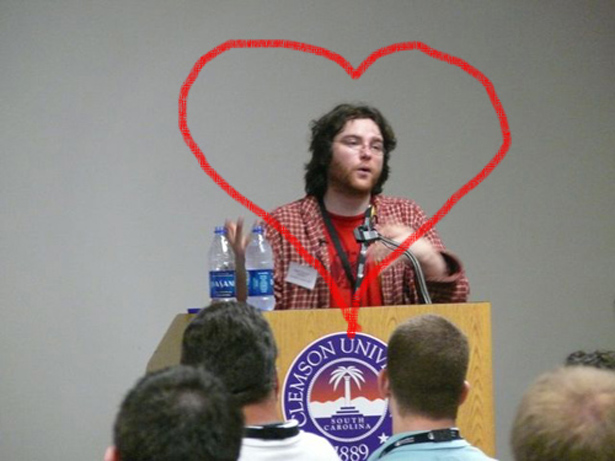 Icculus, of icculus.org fame, gave a great lecture on the state of Linux gaming. His bowl-you-over-and-drag-you-along nervous energy was awesome to behold, his humor was effortless, and his passion was real. I love this guy for making me wanna crack open PyGame all over again. The precariously balanced, uncapped water bottles were a nice, edge-of-your-seat touch. Plus, he’s wearing a giant floppy flannel. Yes, please!

Not pictured: Random 2:00AM Magic the Gathering tournament, me trying to get coffee out of a waffle machine, and trying to explain “electroclash” on the ride home.

Extra thanks to Shay for the ride.