During the last three days of 2011, my sole purpose in life was to wait for my furniture to arrive, while intermittently darting downstairs to buy basketfuls of vegetables and jian bing (chewy flatbread).

Yes, I was wildly excited about defeating the TaoBao ordering process by actually buying something, but it turns out that checkout is only half the fun. Now that I’ve got the hang of it, ordering is easy. Delivery, on the other hand, can apparently only happen when you’re at least two blocks away, slathered in massage oil, with two young spa attendants waving aromatic orange peels in your face, and it involves twelve successive phone calls from the freight driver, four calls from the property management office, two red stamps, three signatures, six lords a’leaping, and the personal heavenly blessing of the Jade Emperor himself.

After that exciting debacle, I figured that until my work desk was resting peacefully in the home office, the only safe excursion was to the local grocery, where I could sprint back home, carrots flying, in time to meet the delivery guy.

Chinese refrigerators are quite small, and kitchen cabinet space is at a premium. I recently learned this is because, up until a few decades ago, the traditional Chinese kitchen consisted of only a wok, a curved spoon, a giant cleaver and, depending on how traditional your kitchen was exactly, an old lady who thoroughly disapproves of your nutritional choices and wishes you’d eat more rhinoceros horn. Practically speaking, this makes the American dream of lurching through a grocery store once a week and returning home with a Mount Everest of noms (I call it Nom Everest) impractical, so Chinese tend to buy a bunch of spices and snacks, and then go to the store once daily for fresh vegetables, noodles and tofu.

Yes, the thought of buying your daily food supply in basket-sized batches sounds quaint, provincial and vaguely organic, but in practice, it’s an ever-present reminder that the human body is a disgusting sac of ravenous biomatter requiring constant sacrificial fuel.

The tedium of the endless trips is somewhat mitigated by the fact that I’ve always loved grocery stores. Don’t ask me why. Maybe it’s because as long as I’m still shopping, there still exists the possibility that I might end up with ice cream. Or maybe because, during any trip to a Chinese grocer’s, I can actually hear David Attenborough’s voice when I stand next to the deli case. In any event, I find the whole process vaguely comforting. Or rather, I did. The happy complacency was shattered shortly after I saw this: 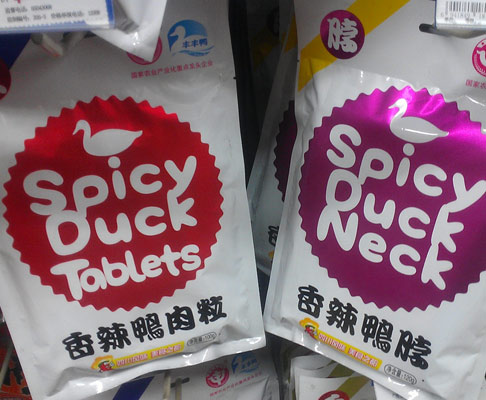 LOL, I thought, Spicy Duck Tablets. I whipped out my phone to take a picture. Click.

Within less than 10 seconds of the shutter snap, a bald man in his mid 30’s with a huge, dripping splatter of what appeared to be blue hair dye drying on his scalp materialized next to me, and an audible hush settled over the aisle. “You can’t take pictures in here,” he said. I froze, my synapses firing hysterically while my brain Googled “it’s cool, you’ve seen this before”. No search results returned. Why would a bald man dye his non-hair? I thought, paralyzed by weirdness. And once he started dying it, why would he not distribute said dye evenly across his scalp? Did he come to work like that, or did he do that here? Is he a grocery store enforcer?  Had he been watching me from some kind of surveillance room? Why can’t I take pictures of food packaging? Somewhere in the recesses of my consciousness, autopilot engaged.  “Oh, okay,” I mumbled, and wandered off towards the frozen dumplings in a daze.

I spent the rest of the day trying to construct a plausible sequence of events that led up to that moment.  The best I could do was that maybe he was cleaning up an exploded package of dye in the storeroom when his apprentice enforcer burst in and breathlessly reported, “there’s a foreigner taking pictures of the duck tablets – gogogo!”, at which time he used his standard issue teleporter to deconstruct himself at the cellular level and reassemble in the snack aisle next to me. Guess I’ll never know. What I do know is that, after the incident, I was too paranoid to take a picture of the large snack bag reading simply “PASTE”.

Aaaanyway, everyone here is gearing up for Chinese New Years (Jan 23rd), and my friends and I have made plans to shoot off fireworks on the ice at HouHai between bouts of Magic: the Gathering. I’ve tried on several occasions to explain the pandemonium that is Chinese New Years, but I think the best I’ve ever managed is, “Dude, you don’t even know”. Gregg comes to my rescue here by reminding me that fireworks stands sell child-sized backpacks full of sparklers and rockets so that, come New Year eve, every toddler turns into a sugared-up kamikaze armed with explosives.

Here’s hoping for a fire-breathing Year of the Dragon.

Previous Story:
Breaking News: People who can’t attach photos to email are legislating about the internet
Next Story:
Welcoming the Year of the Dragon