Chinese New Year in Chengdu: Ruckus in The Big Empty

The Year of the Snake kicked off this February 10th, sparking widespread depression amongst product designers tasked with making grotesque cold-blooded reptiles look like warmly adorable harbingers of prosperity. 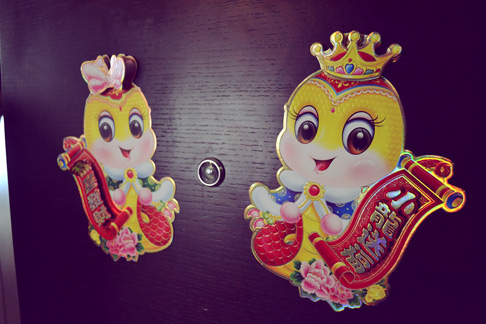 We took a Saturday morning flight to Chengdu to ring in the new year and light off some fireworks with old friends. Chengdu is the capital of Sichuan province, and though it’s not hot enough to be included among China’s Three Furnaces, in February it’s still 50 degrees Fahrenheit to Beijing’s 25, a haven of single-jacket, scarf-optional winter fun. The region is famous mostly for willowy women, dishes topped with mountains of chili peppers, panda bears and outdoor tea gardens. As of yesterday, it may also lay claim to being the first place a group of foreigners ever played Magic the Gathering in a majongg parlor. You’re welcome, Chengdu.

It goes without saying that Chengdu, like most of the second-tier cities in China, is undergoing development at a pace that makes economists wail about real estate bubbles, and the roads were under heavy construction to accommodate the expected expansion. Driving through the southwest districts of the city was like off-roading in the Congo, and deep, jagged pits in the middle of the dismantled streets were surrounded with signs reading “today’s nuisance is tomorrow’s convenience”. Which is the polite way to say “tomorrow’s convenience is today’s broken front axle”. 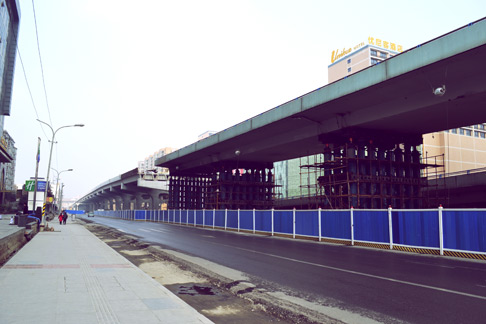 For any Beijingers who don’t leave the city during the holiday season, Chinese New Year means two weeks of blessedly empty roads and beating hungrily on the windows of shuttered supermarkets. Ostensibly this is because Beijing is a city of recent transplants, and every Chinese with two jiao to rub together hops a train to their hometown for a steaming plate of mom’s cooking and a spirited earful from grandma about finding a serious girlfriend before the ol’ babymaker goes soft. So my assumption had always been that while residents disperse out of Beijing and Shanghai like granules of sand streaming through a cheese grater, second-tier cities like Chengdu fill up with the human runoff. But no. Chengdu proves to be similarly ghostly, begging the question: where the hell are all the Chinese people? 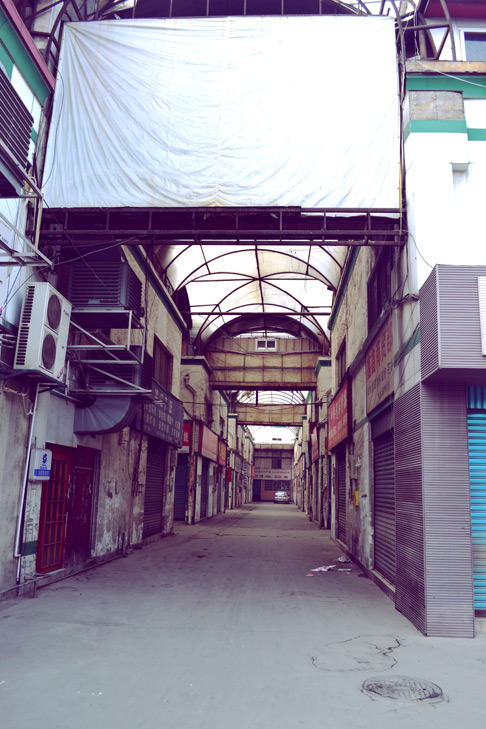 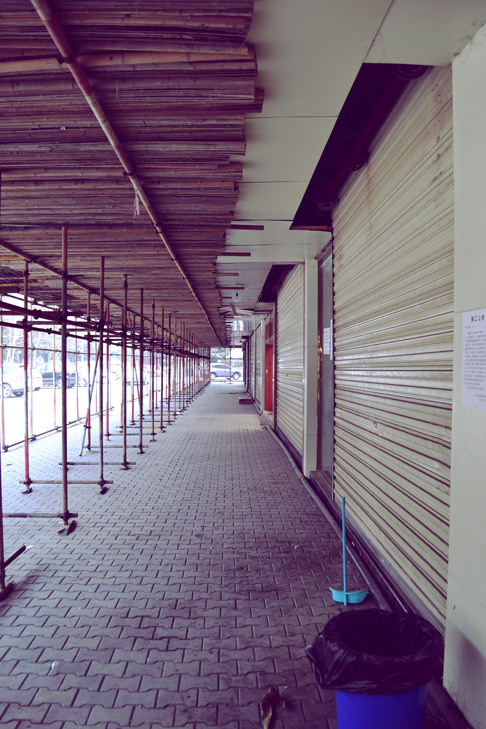 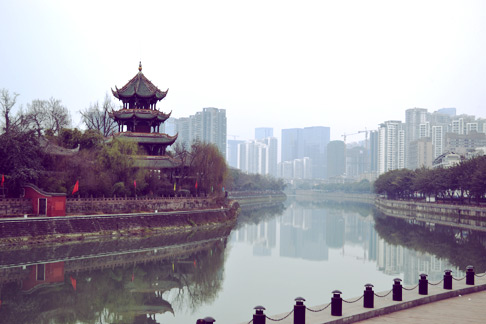 Took us a couple days, but we did eventually find the entire population of greater China at the Chengdu temple fair. Last year, I visited the temple fair in Beijing, and it was a thoroughly northern occasion: drips and drabs of color eeked through the grey frost, and what finally drove us home wasn’t satiation but rather that we could no longer feel our freezing limbs. But the fair in Chengdu was something else entirely. 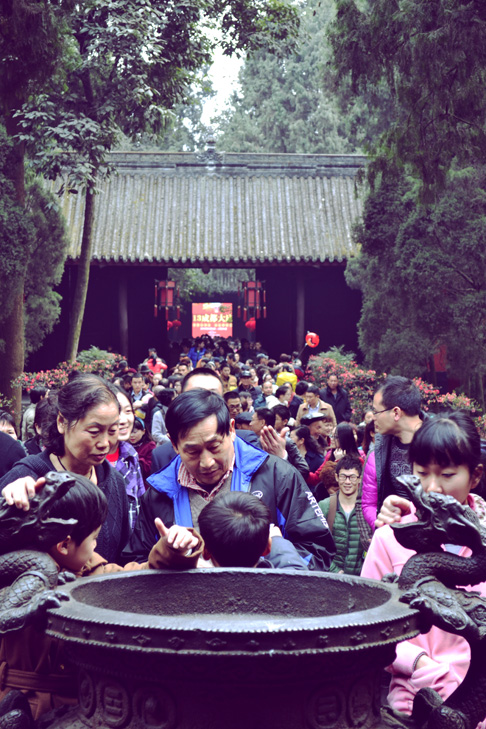 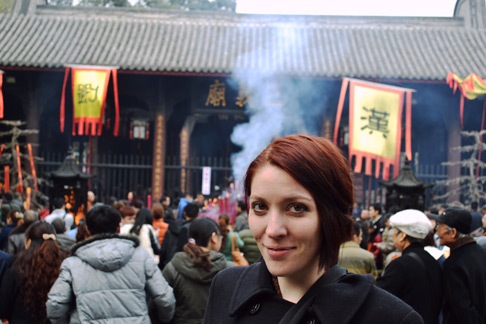 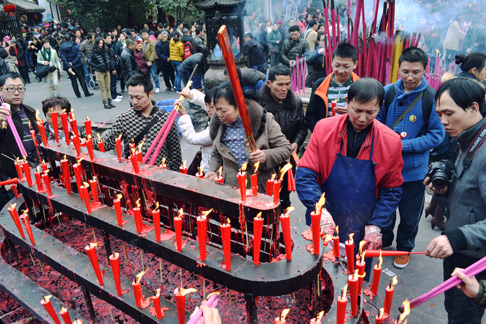 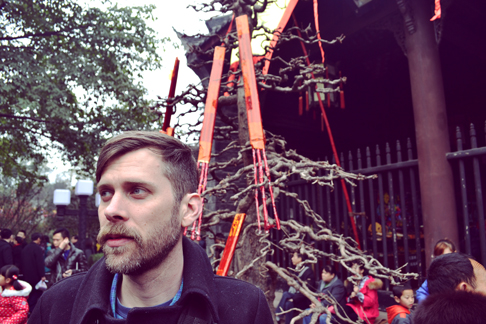 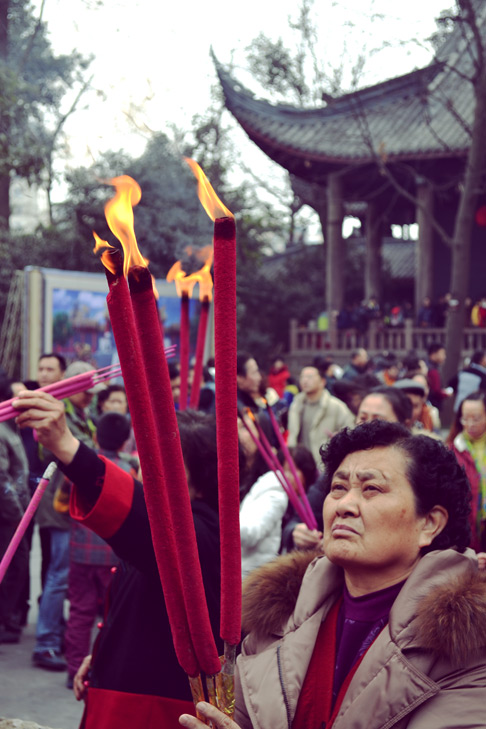 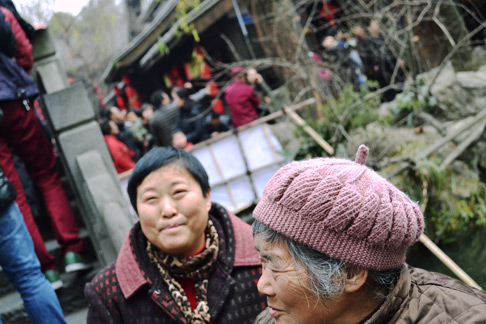 There was incense and prayers for the new year, Buddha statues, sugar sculptors, beaded knicknacks and silly hats, rides and magicians, and a massive stage of world music performances where several hundred stone-faced Chinese watched a Russian dance troupe in neon spandex butterfly outfits do a choreographed number to Sade’s Sweetest Taboo. Chengdu was not impressed. 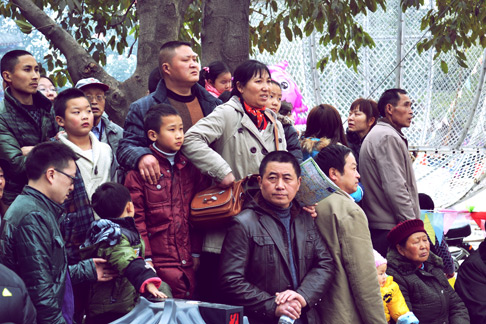 “This is so bad it’s actually making me squirm,” said Candice, veteran of surreal world fair amateur stage performances though she is, and we scampered off towards the snack area. Sometimes I think you’re just too good for me.

As we left the fairgrounds through a series of psychedelic inflatable pink archways covered in blow-up stars, I felt something scrabbling at my elbow from behind and turned around to see an ethnic village man launch his finely dressed monkey at my arm.  So yeah, that happened.

Eating in Chengdu over Chinese New Year was a bipolar experience – the fair, of course, was packed with noms, but some days we wandered for hours before we found an open restaurant. The temple fair had so much amazing food that Candice ate what she could and stuffed the rest of the noodles and egg-y rice cakes and sesame balls in her thermos to save for later. I ended up with crab apple tanghulu and handmade peanut candy. 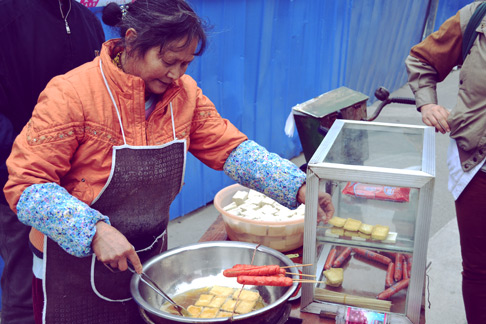 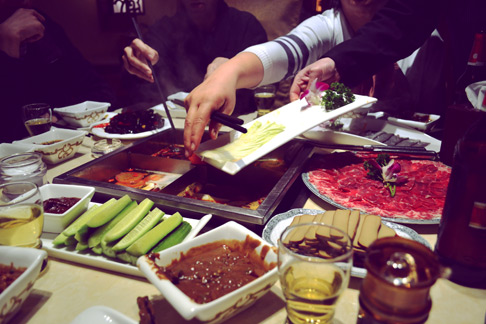 Chuanr at the temple fair: 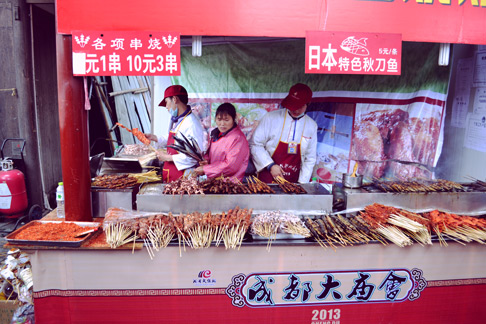 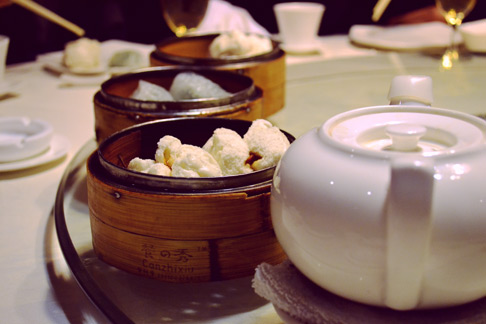 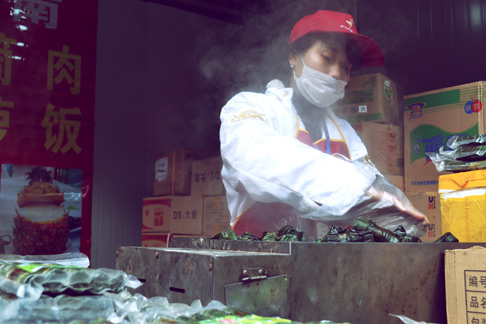 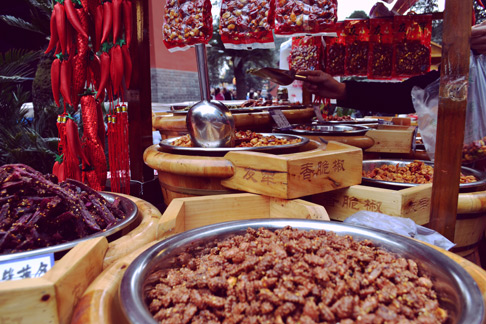 All that eating was necessary. Gotta keep your strength if you expect to blow up a city.

It may be worth mentioning that I’m telling this tale a bit out of order: loading up on explosives was our very first task off the plane and we stuffed our backpacks with poppers, roman candles, launchers, sparklers and other gunpowdery goodness. 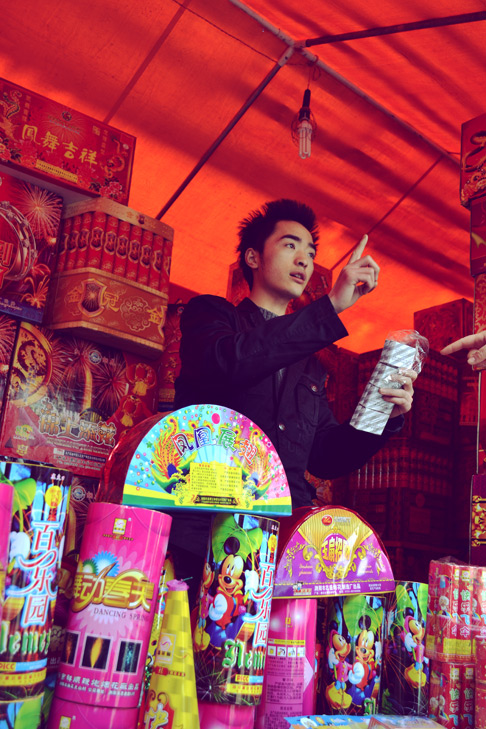 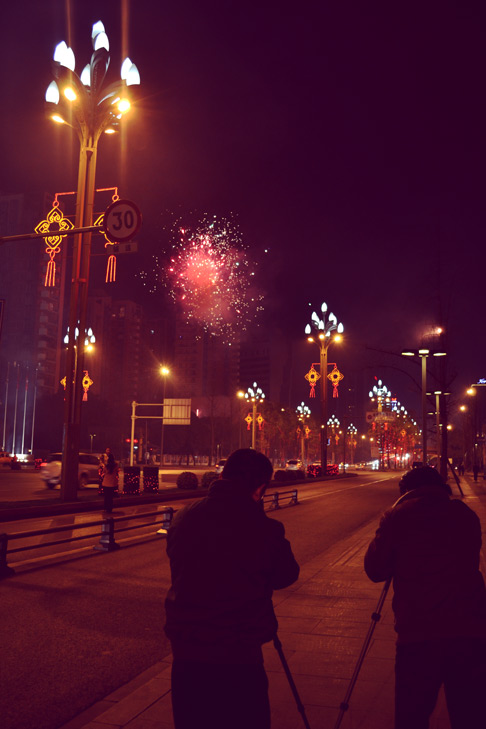 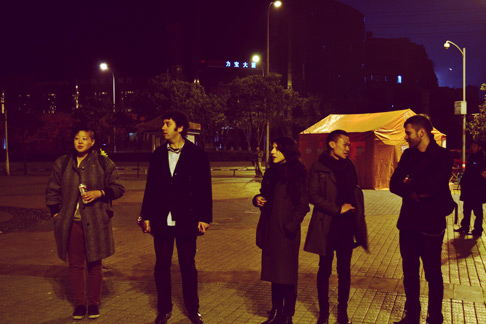 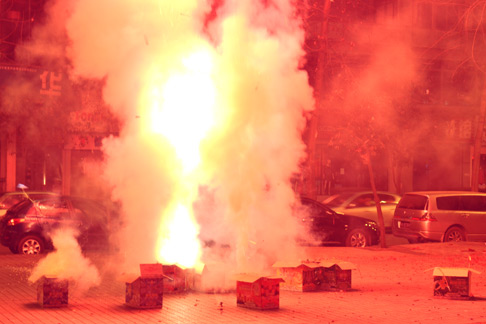 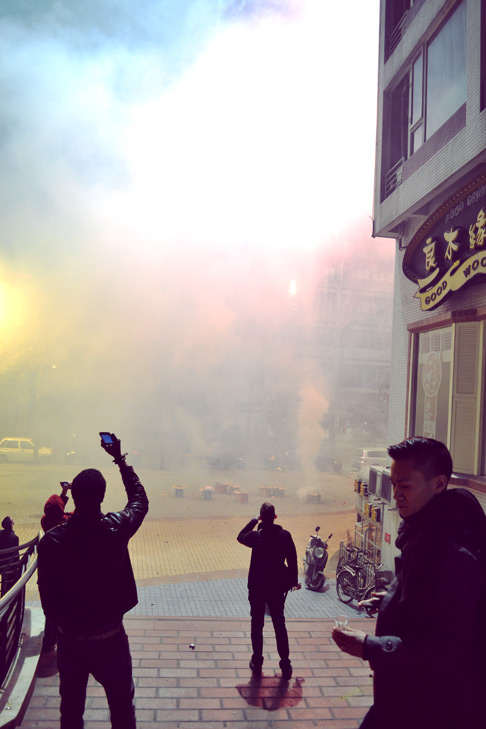 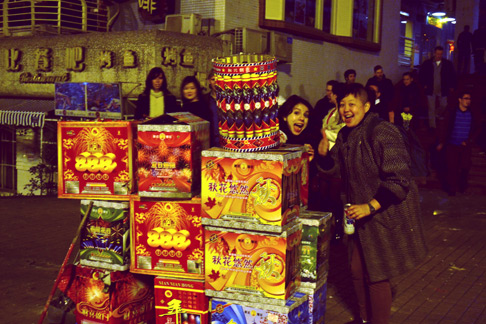 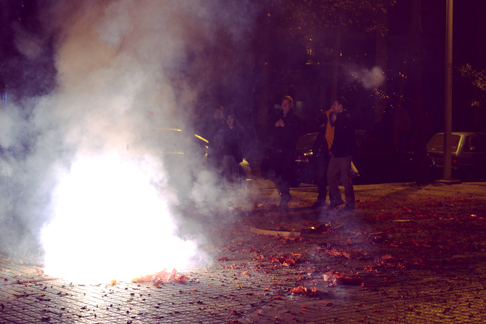 “You can’t come to Chengdu and not see the pandas,” said Charlie. “I mean, right?”

Au contraire, argued two members of our attache who will remain nameless, proving there’s absolutely nothing that any six people will unanimously agree on. “Pandas are fucking lazy, they can’t be bothered to stop stuffing face long enough to procreate.” And granted, a species who needs outside intervention to put down the snacks and start doing the nasty may deserve their own extinction. But I’d argue that when you share a planet with homo sapiens, being fuzzy wuzzley is just as valid a Darwinian survival mechanism as natural camouflage. Most of humanity seems perfectly content to handle the ovarian fertilization as long as pandas keep crunching through paw-loads of bamboo like the smoogie fluffy wuffikins they are. 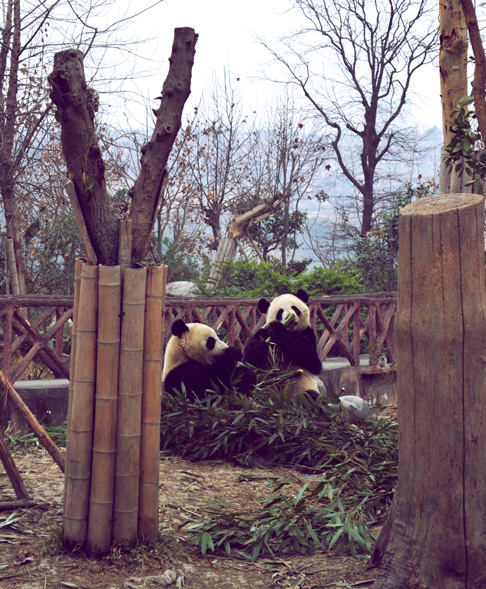 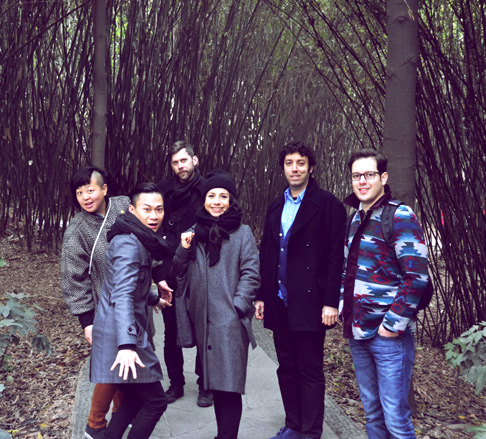 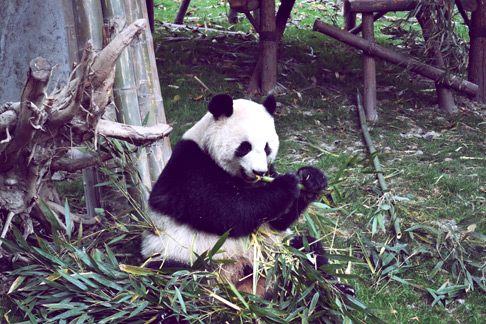 Anyway, considering our little band of childless no-gooders spent, as Alex pointed out, a total of ten hours in the He Ri Jun bathhouse shuffling around in our Patient Zero jam jams, getting back-to-back massages and raiding the free fruit buffet, I feel the criticism may be slightly disingenuous.

Chinese bath houses are the best places on earth, and Chengdu does them particularly well. Imagine, if you will, a multi-story, 24-hour slumber party with several thousand strangers in matching pajamas and plastic slippers taking extravagant baths before slouching from mahjong table to dining hall to sauna and finally up to the plaza of personal armchairs for a snooze. At the entrance, every guest gets a personal RFID bracelet to swipe for various services, and your shoes are confiscated so you can’t run out on the bill. Eyes half closed, you could stay inside this ecosystem indefinitely, wallowing in foot rubs and full-body exfoliations.

“Oh yeah,” confirmed one of our chatty massage girls, the one with arms like two slabs of beef, “there’s this one guy who didn’t leave for six months. He just headed out for a few hours during the day and came back again at night.” What, does he pick up his mail there? Half a year spent in the bosom of a permanent blanket fort. There are more ways to live this life than you or I can count.

Thoroughly fed, scrubbed and doused with tea, Kyle and I parted ways, him for a week sitting by the lake in Kunming and me for my desk back in Beijing. I don’t travel for another couple of months and the wait is already obnoxious, but I do look forward to watching the spring arrive in Beijing. This has been a long, long winter. 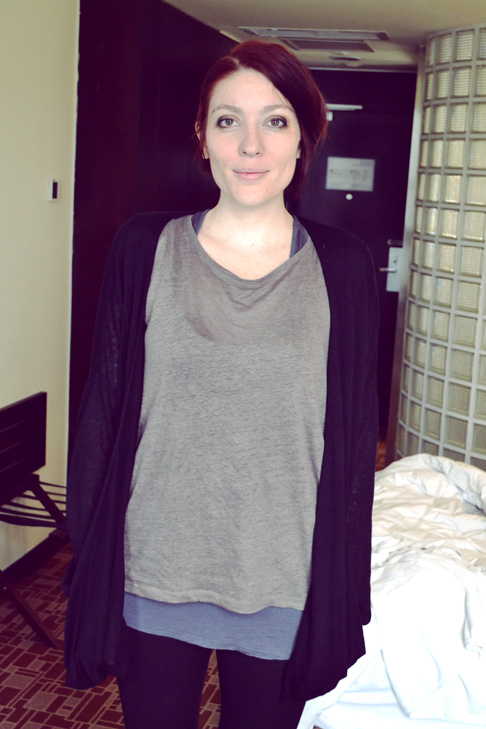