No Shit-ism: Chardonnay with a conscripted Soviet army bomb tech, among other oddities 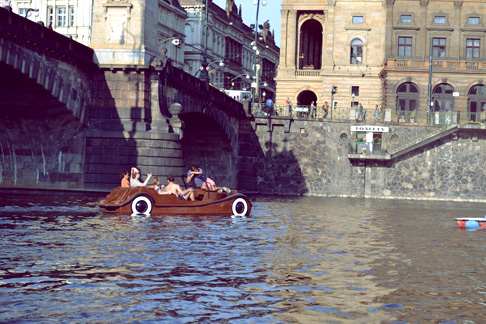 I might be looking in all the wrong places, but after four weeks, I think I’m ready to proclaim that Prague isn’t much of a party city. Unless your platonic ideal of the perfect night out involves gyrating to Ibiza trance in a sea of barely-legals, in which case you may count your bases scantily covered. Considering the most original vibe we could find in the music clubs was kinda avante-guard-Applebees, I’m gonna stop trying to avoid sounding condescending and really run with it: Czech, maybe *wince* this is just not your thing?

Kyle and I spent the early hours of Friday night wandering around under the TV tower in Praha 3, in what both the internet and Rick Steves call a “bar district”, but we walked out of the Palac Acropolis at ten, wiping potato grease off our faces, to find the streets whisper-level deserted. “Let’s go back to our neighborhood and have back-slapping small town conversations in the local pubs.” Mistake: by the time we skipped off the subway an hour later, everything – even the corner stores – had pulled the shutters. Everything except a ten-seat wine bar next to a Vietnamese nail salon. The bartender had forearms like mutton shanks and looked like he’d be really sad to have to do a murder, because he’s over that period in his life now.

Robert, clearly a regular, was a friendly middle-aged tough with a gold chain necklace, a skinhead pate and huge pores. He spoke about twenty words of wartime keyword English in single-concept sentences, but it was enough.

“Gorbachev,” he said, waving around a cheap glass of white wine. “Afghanistan. Chechnya. Pyrotechnic. My friend, boom. American plastic bomb.” He showed us the scars on his chin and hands where the fire had burned his skin off. “Fascism. Stalinism. Communism. Shit.”

He kissed us on the cheeks a lot.

“Did that just happen?” Kyle asked as we walked home after closing. Yup. Yay.

Next morning, we stopped at the Saturday farmer’s market near Ji?ího z Pod?brad for coffee, a jar of garlic olives, and some kind of fig danish that was actually pretty gross. I’m super into the Prague subways: they make me want to roller skate. Coming up from the platform, we pass a descending men’s rowing team sitting canoe-style on the escalator, pretending to be in a boat. “Heave!” they yell in unison. “Ho!”

“What about that? Did that just happen?” Yup. Yay. 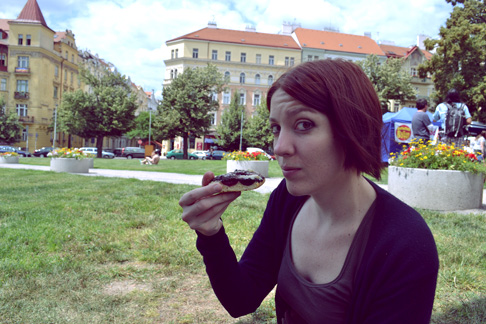 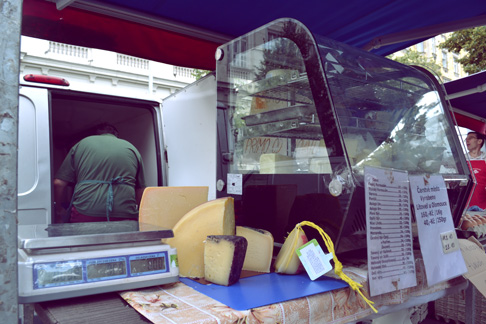 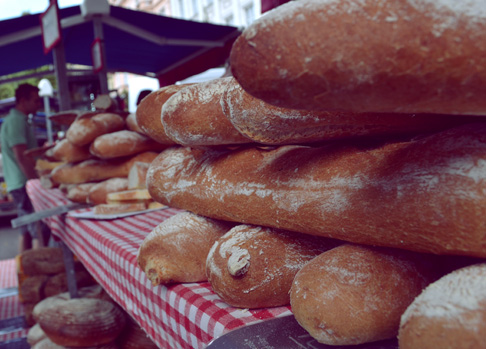 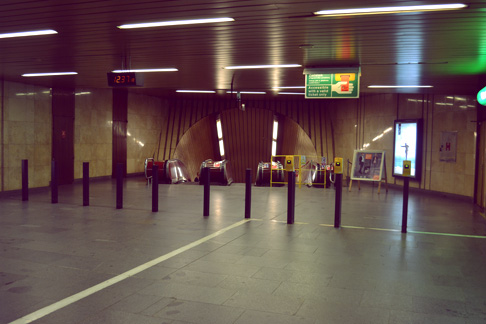 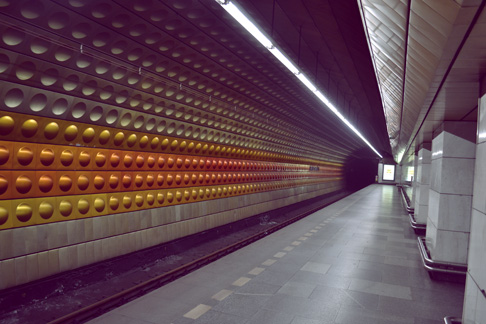 This happened too: The Museum of Miniatures, near the castle monastery, is two industrial-carpeted rooms lined with microscopes. “The Eiffel Tower in the pit of a wild cherry”, one placard reads. “John Lennon on a grain of rice”. Turns out that if you put your camera up to the eye-holes and aim really carefully, you can get the shot. I’m bad at science, but doesn’t that seem like it wouldn’t work? It does, though.

Two cars on the wing of a mosquito: 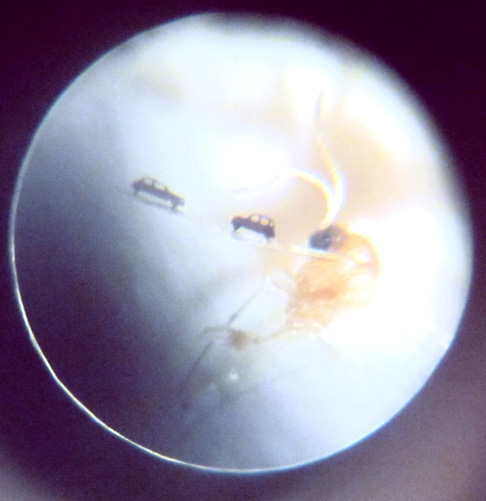 Camel caravan in the eye of a needle: 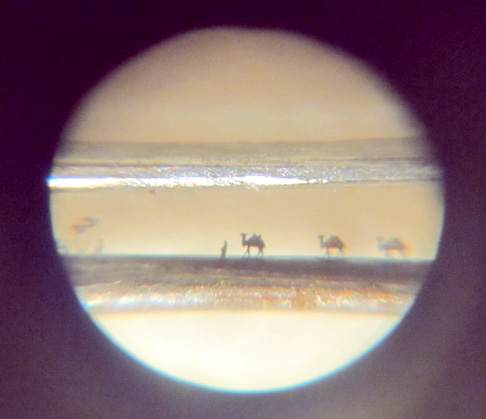 A flea with scissors, and also some keys: 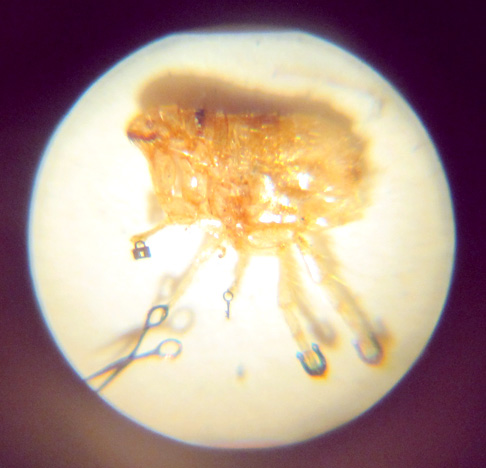 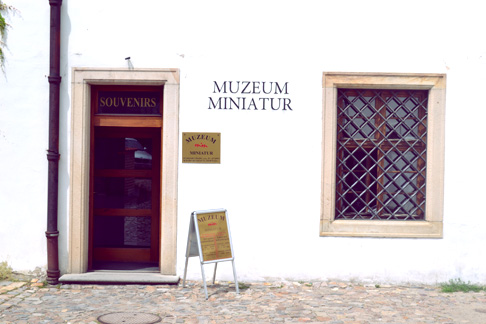 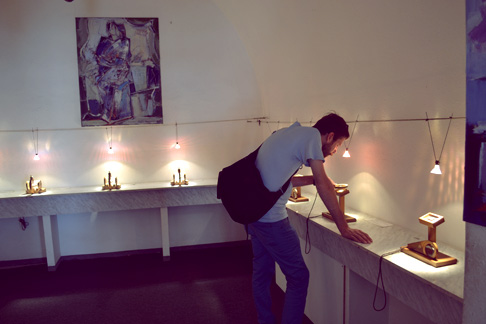 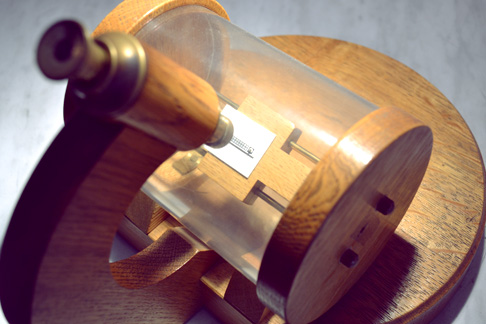 A picnic over Prague: 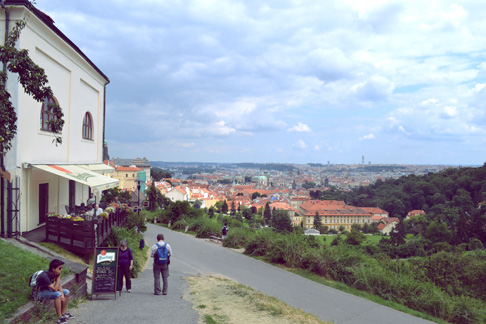 Picnic spot in the apple orchard below the cloister: 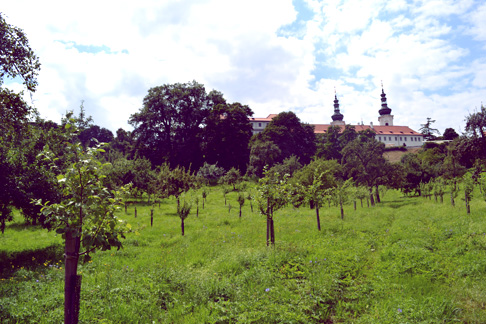 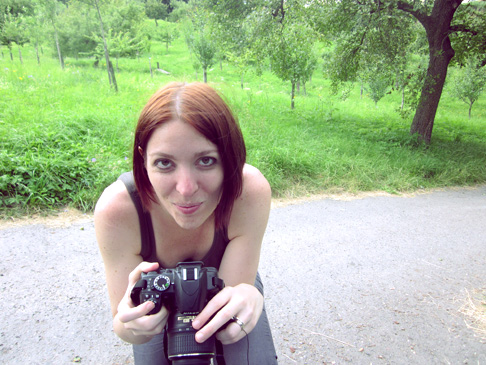 We spent the rest of the day in a rom-com montage: there was an afternoon peddle boat ride on the Vltava and then there was a cheese plate dinner at a French culture street fair. If it makes you feel any better, no one gave anyone else a lick of their ice-cream cone and then got some on their nose. Also, no one hilariously chased a run-away hat. 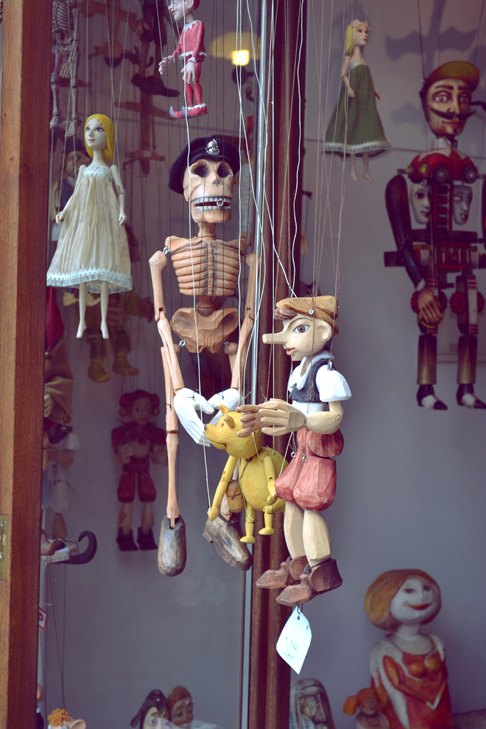 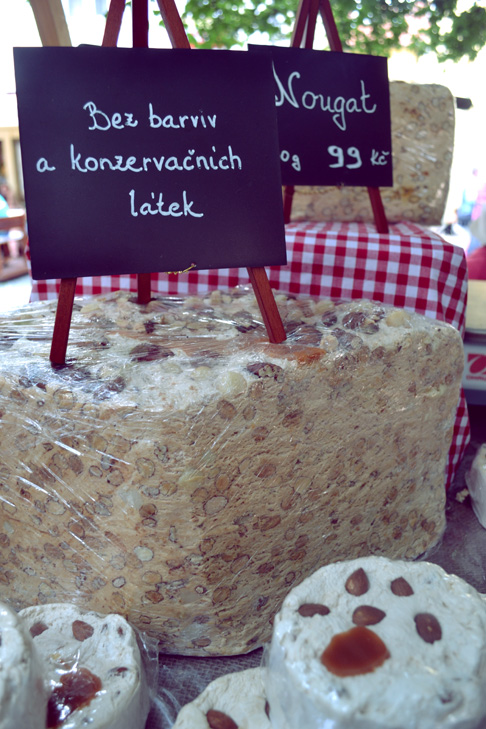 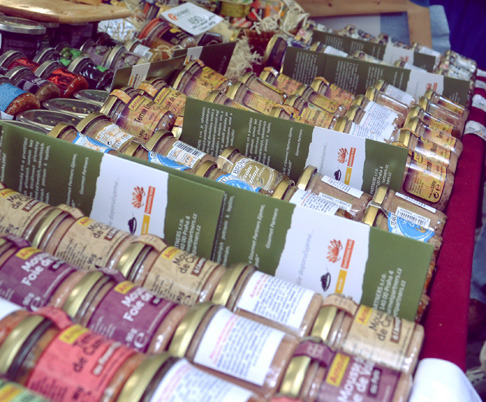 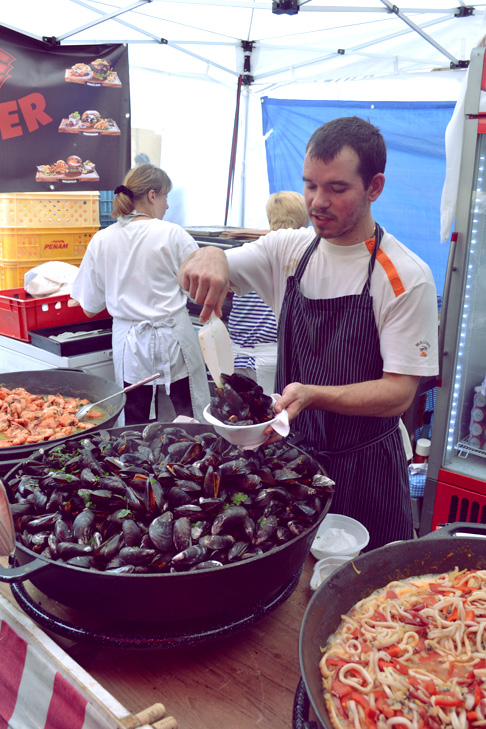 All the boats shaped like swans were taken, but ours wasn’t too bad: 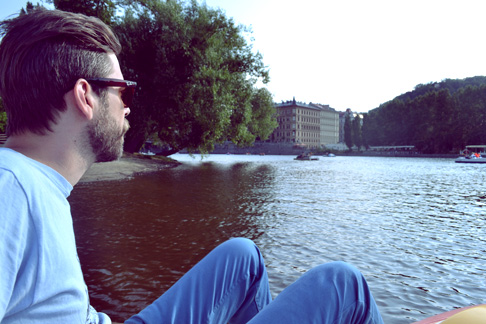 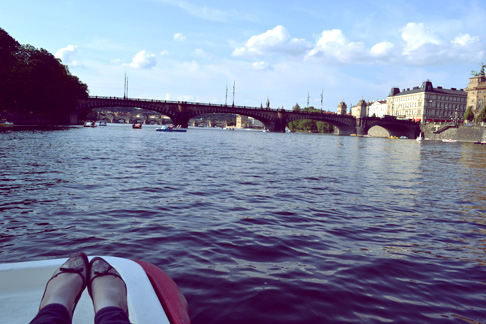 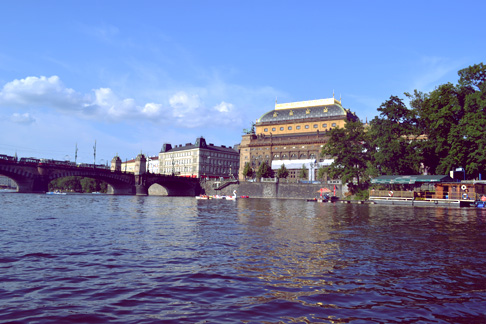 Male models riding on the hood of a carboat peddle past bathroom suspended in river wall (like ya do):

Previous Story:
So you were all totally right and Berlin is the promised land
Next Story:
In Photos: Surprise! 24 Hours in Hongdae