Chiang Mai to Bangkok: Flight of the Visaless Valkyrie

There’s a very good reason that I ended up back here in Los Angeles several months too early, and without so much as a by-your-leave. It was a peaceful Monday morning like any other. I had sweat out 50% of my body fluids in my sleep and mutant, tropical bugs were waiting in my bathroom to send me yelping and mincing out of the shower – revenge for swallowing their compatriots in the night.

Lydia, who roomed with me for a week or so, had decided to hop down south to the islands on her own and laze around for awhile. Rock climbing digression: 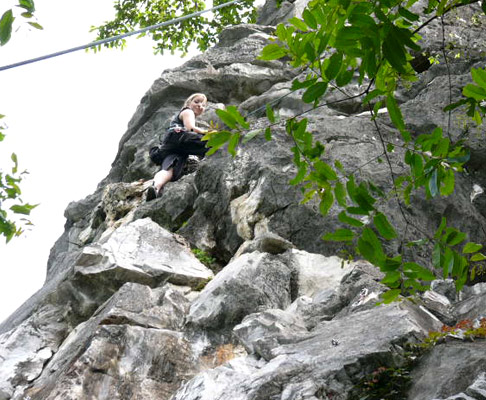 Now, it gets a little sticky here, because I was scheduled for another trip across the border on Tuesday to renew my soon-to-expire Visa, so needless to say it would have been an unsatisfying arrangement if by chance I had woken up to the realization that my passport, ATM card and money were snug in Lydia’s backpack, playing ‘show me your ID’ with each other and picking cracker crumbs out of a pile of loose change and snack-bag corners.

I sat bolt upright in bed with adrenaline momentarily frozen in my limbs, and the “Oh Shit!”, when it came, came from the diaphragm, WWF style. It was every plane you’ve ever missed, every Big Appointment you’ve ever slept through, every kid you realized, well into your third foray to the bar, you didn’t pick up from school. It was every time, right as you settled into bed, that it dawned on you that your 20-page report was due tomorrow. Morning. Because I had less than12 hours to track someone down who was currently on a 48-hour trip, and entirely unreachable except by email.

Me (exploding out of the elevator at a dead run): MIIISSSSS! Miss, oh Miss Miss Miss, oh no, oh nononothisisnothappening, Miss? Excuse Me? English?

Me: Cannot what? Miss? Bus station? Call? Oh, look at that, right next to you. A yellow pages.

Me: You don’t understand. You… ok. You have friend speak English? You friend? English? Call?

Leaving her maimed body in my wake, I sped over to Immigration.

“IF I had this FRIEND,” I asked them, “you know, who MIGHT overstay their visa POSSIBLY on ACCIDENT, maybe, but not for sure, but LET’S JUST SAY it happened to someone who isn’t me, what should they do?”

“You should leave, given your circumstances,” they said. I won’t get into the here and there of it, but walking out of that office I was convinced it was time to go home. Quickly. Without being stopped by the police.

And so, a few days later with passport and expired visa in hand (thank you, UPS), I gratefully boarded the train to Bangkok. And then I gratefully spent 6 of 15 hours sitting on top of the toilet seat in the squalid train bathrooms to avoid the visa checks that the cops were doing up and down the train. And shortly after that, I gratefully spent two hours finding a hotel that didn’t insist on seeing my papers. In fact, I was so full of fucking gratitude by the time I threw my bags down in a little crypt of a hotel room that I spent the rest of the day sharing my boundless gratefulness with everyone who looked at me sideways.

But that’s all in the past. I’m home, surrounded by lattes and dairy . And life is good.

Previous Story:
Chiang Mai: Reluctant Rock Climbing
Next Story:
Back in the ‘Jing